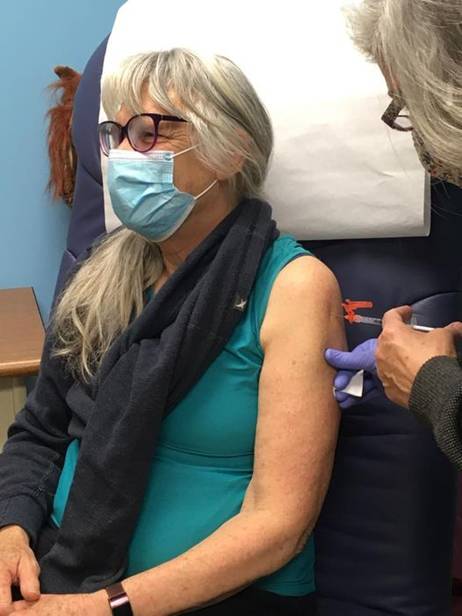 On March 30, 2021 I received my 2nd COVID 19 vaccination at our medical center in Lake City, Colorado.

Symptoms after being vaccinated show our bodies are working to be able to fight the disease.  After my first COVID 19 vaccination my arm was just a bit sore. Having heard that many people had a very sore arm I made sure to rub and exercise my arm and that helped a lot. I received my second COVID 19 vaccination on a Tuesday, exactly 4 weeks later, about 11:30AM. I felt fine until Wednesday morning. I woke with several symptoms that continued all day including a sore arm and rubbing and exercising my arm didn’t help much this time.  I had an upset stomach that was helped with crackers and soda water. A mild headache, fatigue and chills were helped with taking ibuprofen every 4 hours and ibuprofen PM at bedtime. Symptoms were lessening Thursday and Friday and I woke up Saturday feeling completely normal again!

About a year into the global pandemic the worldwide death toll exceeds a sickening 2.5 million. More than half a million deaths have been in the United States. Hope is arriving in the form of vaccines that have shown notable success in preventing COVID-19.

Prevention protocol is not about what one feels comfortable with or what one thinks but rather what science has proven. “The vaccines have been highly protective against severe disease, hospitalization, and death,” says, executive director William Moss of the International Vaccine Access Center at Johns Hopkins Bloomberg School of Public Health. Even after you’ve been vaccinated, though you are protected, it’s still possible that you can transmit the virus to others. So you should still wear a mask, practice social distancing, and frequently wash your hands when out and about with crowds.

“Without symptoms” can refer to two groups of people: those who eventually do have symptoms (pre-symptomatic) and those who never go on to have symptoms (asymptomatic). During this pandemic, there have been people without symptoms who have spread the Coronavirus infection to others. An asymptomatic carrier is a person or other organism that has become infected with a pathogen, but that displays no signs or symptoms. Although unaffected by the pathogen, carriers can transmit it to others or develop symptoms in later stages of the disease.

Typhoid Mary is a well-known, interesting asymptomatic carrier worth googling. She did not have typhoid and looked healthy and felt fine but she spread the disease because she was an was an asymptomatic carrier and would not follow protocol prevention. She was a cook who easily spread the illness by preparing food with unwashed hands. Corona viruses are spread most often by respiratory droplets; thus the masks and social distancing.

A registered nurse friend of mine who lives in southern Indiana says that she’ll never forget that horribleness of so many people dying of COVID on her hospital shift and having run out of supplies so that she had to cover the faces of the dead with black garbage bags – “very haunting.”

The Coronavirus affects different people differently. This past year too many people ignored the warning of mixing households and some people got sick, some very sick, others died, some were hospitalized and some seemed unaffected. Before the vaccine was out, a friend of mine who lives in Oklahoma and her husband, like too many people, choose not to stay home as was strongly advised, instead they flew numerous times visiting family across the country. Who knows if they spread the disease. On their last trip together they ended up flying home separately. Unbeknownst to them at first, the husband caught COVID on his last flight. While still pre-symptomatic he was with his son, daughter-in-law, grandchildren and then his wife when she came home. The family was fortunate that there was only one death. Sadly, my friend marked her 40th wedding anniversary this March as widow.

Be part of the solution – get your vaccinations.

“May you live all the days of your life.”  J. Swift
julie@handsbestrong.com

Living in the Mountains